Sumary of Israel is vaccinated its population at 10-times the rate of the us:

Israel has vaccinated more than 20 percent of its population against COVID-19, leaving the rest of the world – including the US and the UK – in its dust.

The small nation has deployed its military to help run mass vaccination sites 24 hours a day, seven days a week.

As a result, it has vaccinated 1.8 million out of its population of 8.65 million residents, according to data tracking by Bloomberg News – and Israel began its vaccine rollout about a week after the US and the UK did.

The US lags shamefully behind. With 8.02 million doses administered, according to Bloomberg tracking, less than 2.5 percent of all Americans have been vaccinated through a disjointed set of state-run programs, which are so rigid that doses go unused because an ‘eligible’ recipient can’t be found, as happened in New York.

Ivy League institutions rare going rogue, however, with vaccines going to young programmers and graduates who are far from the front lines at places like Columbia University, New York University and Vanderbilt University, the New York Times revealed.

Vaccination is struggling to keep up with the spread of the virus in the US. Nearly 214,000 new cases were reported yesterday, as well as 3,233 deaths, bringing the total fatalities to nearly 375,000. More than 22 million Americans have been infected.

While Israel is moving onto second doses for nearly all its highest priority groups, the US has only administered some 150,000 second doses, according to the Times.

Only an average of about 200,000 Americans have received vaccines a day since the rollout started on December 14 (though the pace is gradually picking up) with more doses shipped to states than they can work out how to give, with West Virginia and South Dakota leading the pack and vaccinating five percent of their populations, while Mississippi, Alabama and Nevada struggle to make it over one percent.

The UK has the opposite problem. Vaccination sites hope to give a jab every 45 seconds – but keep running out of doses. Just three percent of people there have been vaccinated – only slight ahead of the US rate.

By contrast, Israel vaccinated more than 300,000 people in the last 24 hours, according to Our World in Data.

What distinguishes Israel’s plan? It still aims to get the shot to the most vulnerable people first, but has defined that broadly – including anyone over 60, health care workers and anyone with underlying conditions, a highly-coordinated effort and an information campaign that generated trust among even hard-to-reach groups, an official told CNBC. 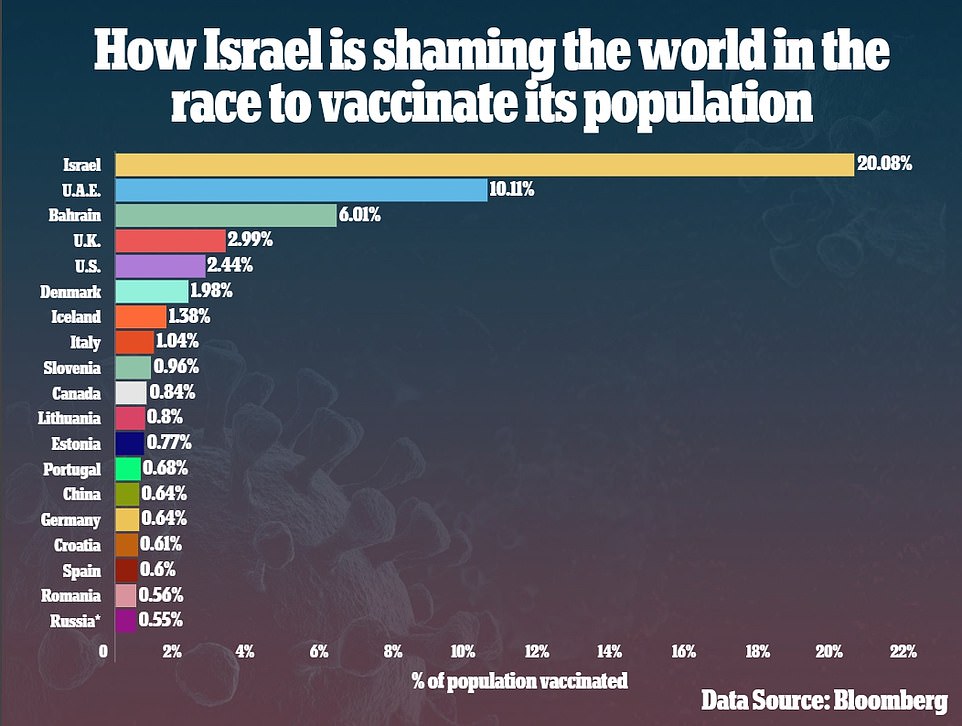 Israel has raced ahead of the rest of the world in its effort to vaccinate its population. Already, 20% of people there (top, yellow) have had at least one dose, while fewer than 2.5% of people in the US have had theirs (lavender) 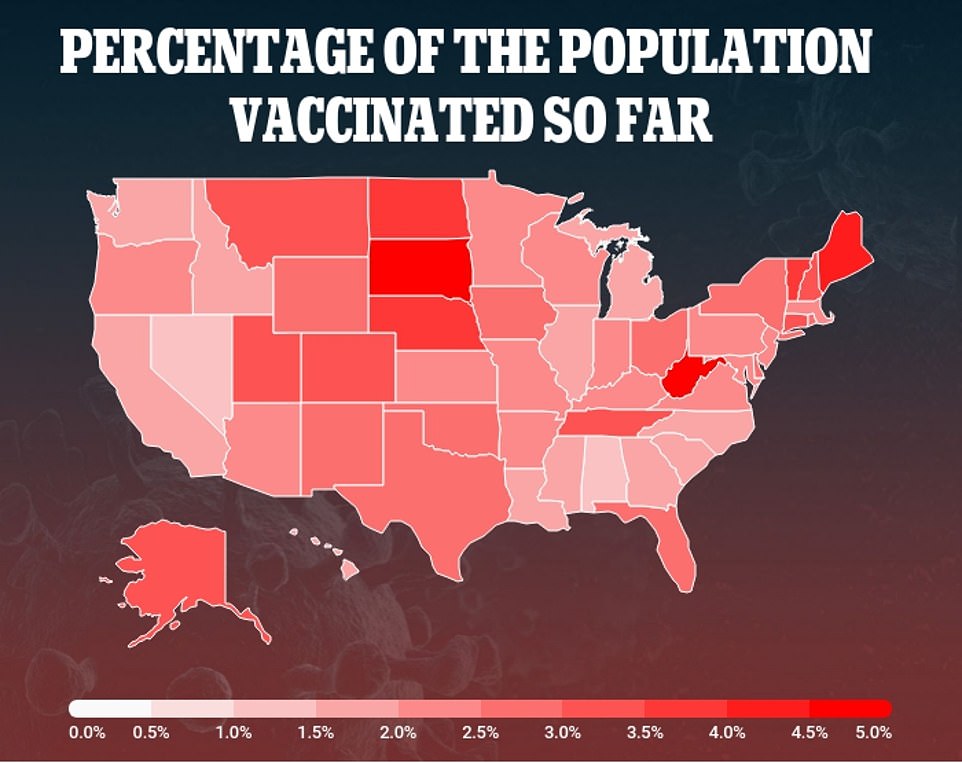 BEST AND WORST: States with flexible plans, like West Virginia and the Dakotas (dark red) have vaccinated about five percent of their populations, while Alabama, Nevada and Louisiana have barely surpassed one percent of the state vaccinated 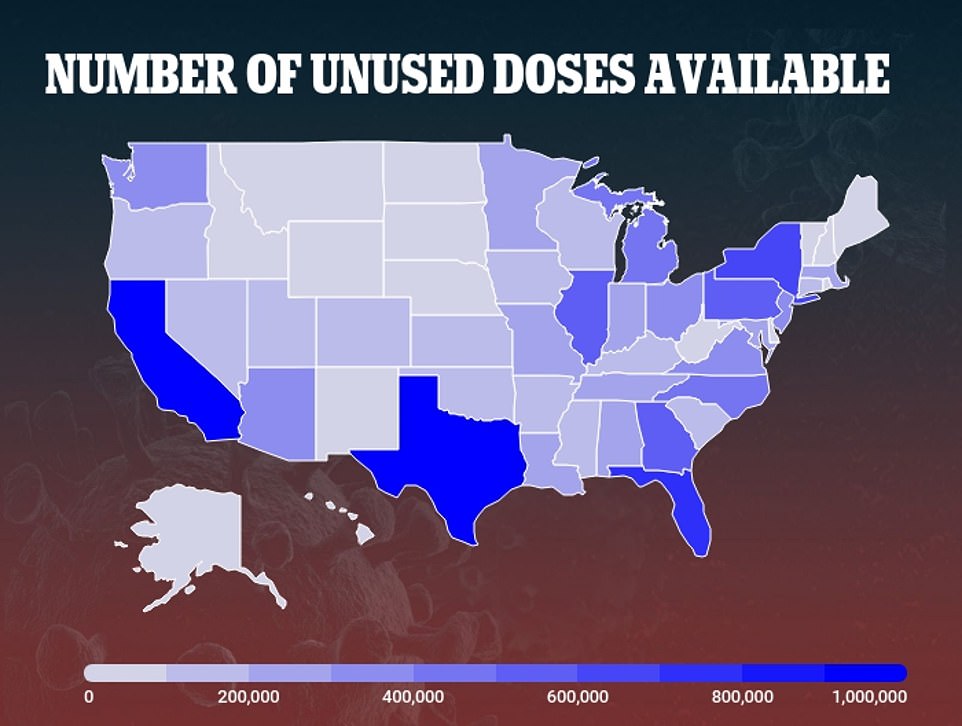 The US quickly shipped out doses of its vaccines, with more than 22 million distributed, but many states, including California, Texas and Florida have more than a million doses sitting unused

WHAT IS ISRAEL DOING RIGHT? A NATIONAL HEALTH SYSTEM AND A BROAD GROUP OF TOP-PRIORITY VACCINE RECIPIENTS ARE SETTING ITS FAST PACE

Israel’s small size gives it an immediate leg-up in the race to get citizens vaccinated.

With 331 million people living in the US, the American initiative has more than 38-times as many people to vaccinate as Israel.

But the smaller nation also has nationalized health systems and a unified method for tracking medical records and vaccines.

Israel’s system for registering everyone’s health information makes it far easier to notify people that it’s their turn to get shots and when it’s time to come for a booster vaccine.

Already, Israel has vaccinated almost all of its highest-priority residents – a broad group that includes over-60s, health care workers and those with underlying conditions.

Elderly inmates are the only group listed as high-priority who have not widely already received their first shots, according to the Jerusalem Post.

The country is well-positioned to hit its goal of vaccinating two million people by the end of January. 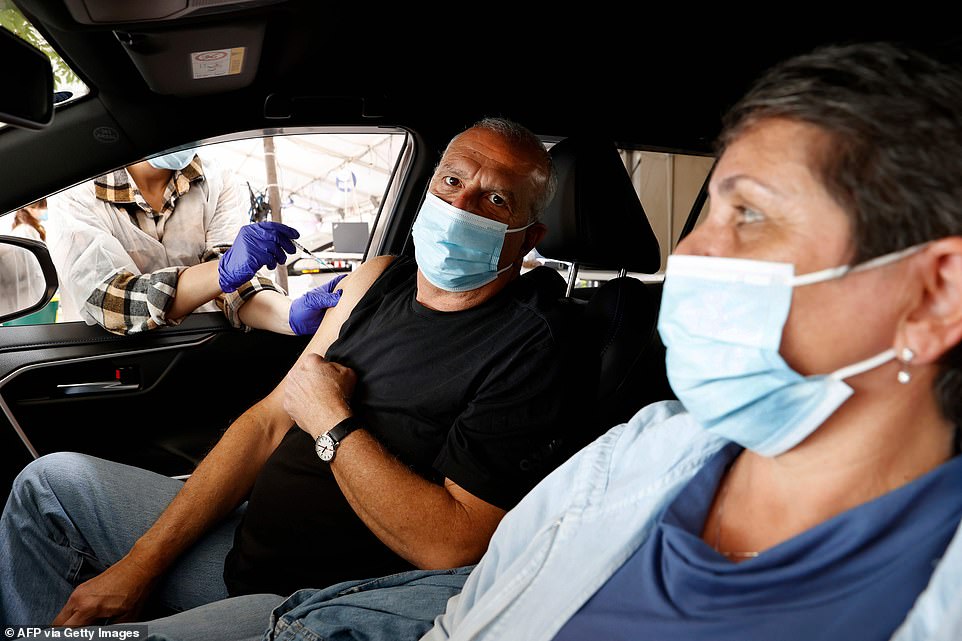 Israel considered all people over 75 to be top-priority, meaning it was able to quickly roll out its vaccines in organized, drive-thru sites 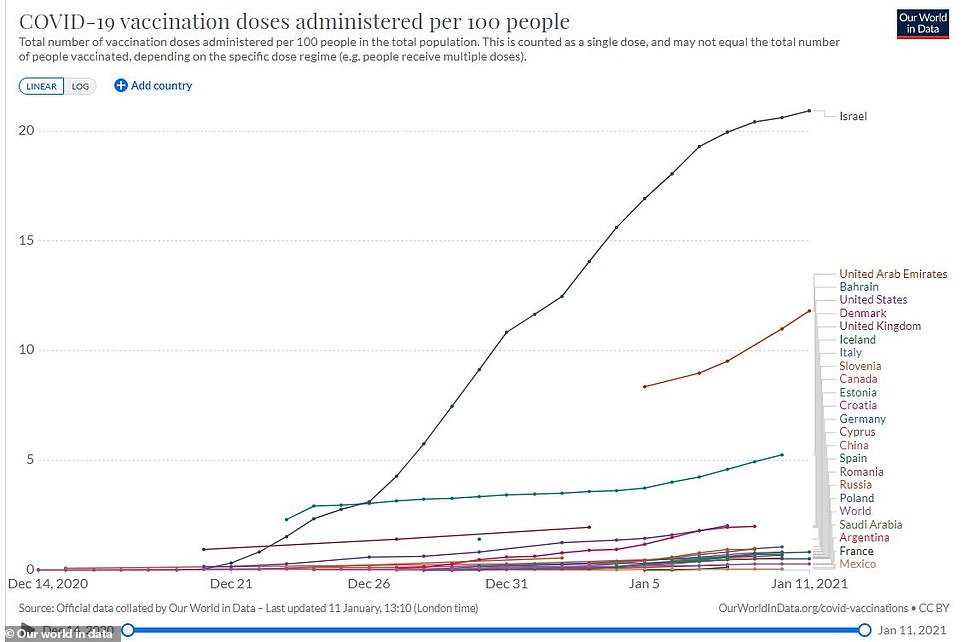 The pace of Israel’s vaccine rollout has only increased week over week, while other nations’ programs remain flat

In fact, the rollout of its vaccine doses went so smoothly that it was desperate to buy more to keep up its breakneck pace.

Another 700,000 doses are due to arrive in Israel on Monday, facilitating its plan to expand vaccinations to people 55 and older.

On Tuesday, teachers will be able to get first vaccinations too, so long as they present a recent pay slip.

One criticism of Israel has been levelled against it by human rights groups: Israel is not including nearly five million Palestinians living in the West Bank and Gaza Strip in its vaccination plan, despite the wild-fire spread of coronavirus cases in the latter, according to the Washington Post.

WHAT IS THE US DOING WRONG? 50 DIFFERENT PLANS AND RIGID PLANS IN STATES LIKE NY HAVE SEEN JUST 2.5% OF AMERICANS VACCINATED

Americans are furious over the glacial pace of the US COVID-19 vaccine rollout.

Only eight million people have gotten their first vaccine doses according to Bloomberg’s tracker.

That is a sorry showing, considering that Operation Warp Speed officials spent months promising that 20 million people would get their first doses before the end of 2020.

Now, nearly two weeks into 2021, fewer than half that many doses have been given out.

More than 22.1 million doses have been distributed to states, but in most they have hit massive bottlenecks.

New York, for example, has given out just 46 percent of the 1.2 million doses sent there by the federal government.

Governor Andrew Cuomo, who became something of a self-appointed poster boy for COVID-19 pandemic response after New York got its massive outbreak under control, came under fire last week for the poor rollout of vaccines in his state.

New York’s vaccination plan was so rigid about giving out no doses to lower priority groups until all health care workers had gotten theirs that four doses had to be thrown out in Harlem last week, and the rollout slowed to a crawl. 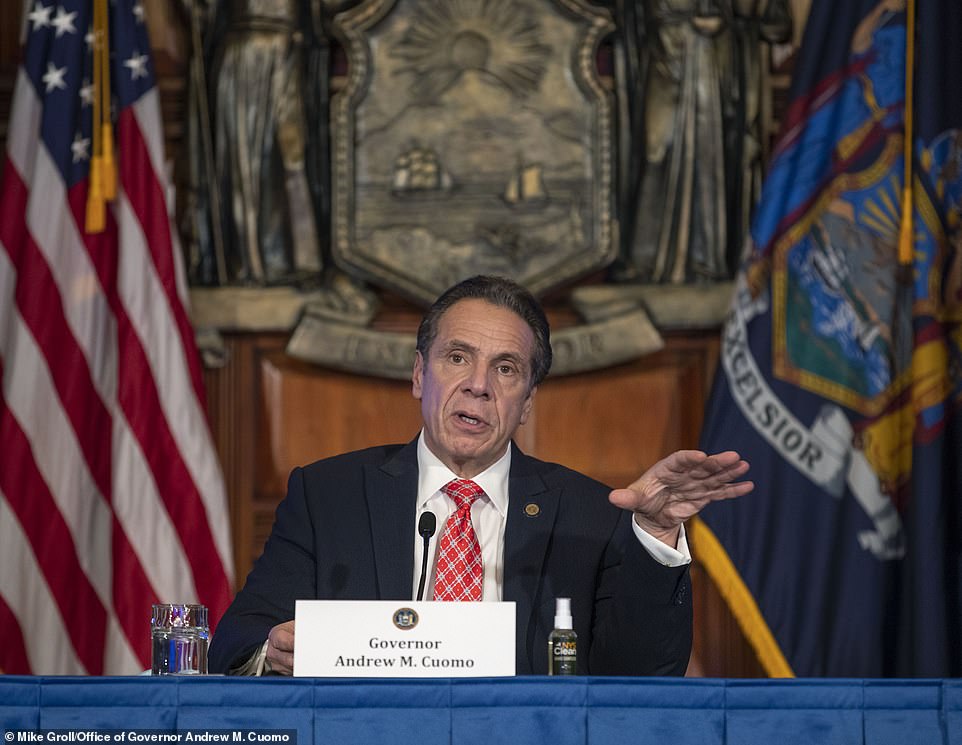 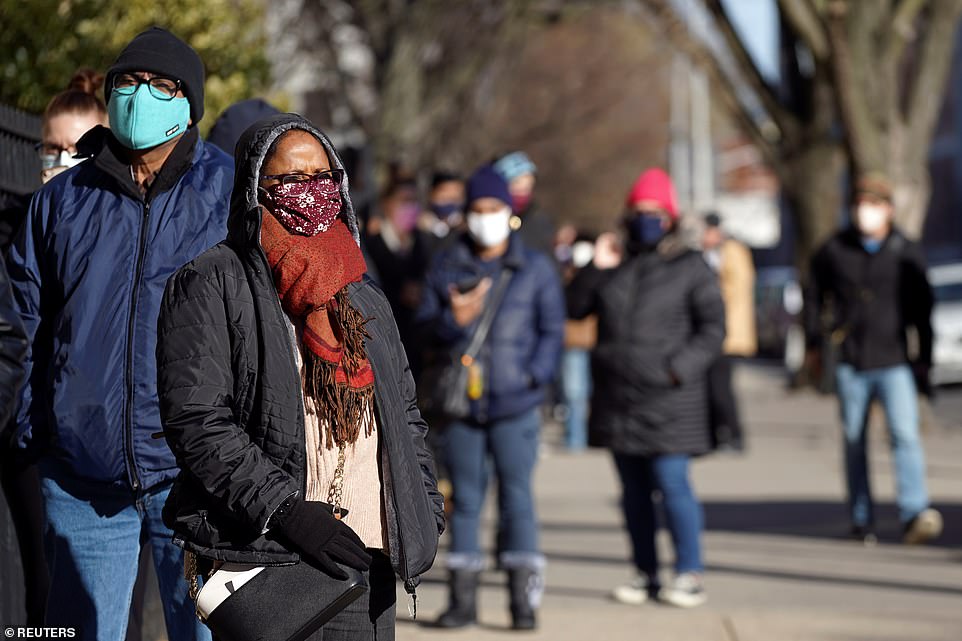 Under pressure from New York City Mayor Bill de Blasio and public health experts – not to mention his constituents – Cuomo finally announced the expansion of eligibility to all New Yorkers 75 or older, teachers and school staff, first responders like firefighters and police and transit workers.

New York City also set up mass vaccination locations over the weekend, in Brooklyn and the Bronx, which opened Sunday.

The mass sites were open for part of the day on Sunday before they start operating round the clock, seven days a week on Monday as part of New York City Mayor Bill de Blasio’s push to set up 250 vaccination locations to meet the ambitious goal of inoculating one million New Yorkers by the end of the month.

Three other smaller sites also opened on Sunday in Brooklyn, the Bronx and in Queens.

In New York, like in much of the United States, efforts to get the two vaccines that have so far been authorized into the arms of Americans have moved slower than hoped due to a slew of issues.

They included strict rules controlling who should get inoculated first, with some healthcare workers at the front of the line declining the shots, and a lack of planning or direction on the federal level.

As of early Sunday, New York City had administered 203,181 doses of the vaccines to its residents out of more than 524,000 doses that have been delivered, data from the city’s health department showed.

The US Centers for Disease Control and Prevention (CDC) has said healthcare workers and nursing home residents and staff should have priority for the limited supply of vaccines.

The agency softened that guidance on Friday, recommending that states move to those next on the list – people over age 75 and so called ‘essential’ workers – to accelerate lagging vaccination programs.

Some states, including West Virginia North Dakota and Connecticut, foresaw the need for flexible vaccination plans.

West Virginia has used more than 70 percent of its vaccine doses and vaccinated five percent of its population – about twice the rate the US is vaccinating people as a whole.

It, like Connecticut, considered a broad swath of people eligible in the first wave of vaccines. West Virginia has also tapped up local, trusted pharmacies to vaccinate nursing home patients, while every other state is doing so through the federal partnerships with Walgreens and CVS. 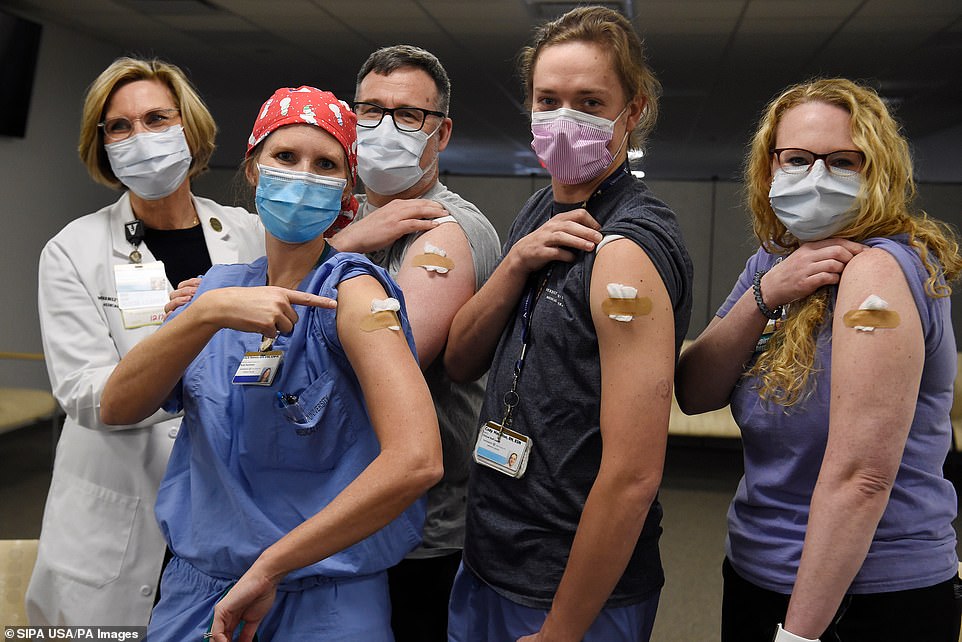 At elite institutions like Vanderbilt University (front-line staff members pictured after getting their COVID-19 shots) are giving shots to staff members who are not front line workers as well, in an effort to speed the rollout and avoid wasting doses, though the Tennessee health department says the doses should got to other priority groups

Connecticut considered everyone from health care workers to school custodians to-priority vaccine recipients. Crucially, when on vaccination site has leftover doses, the state has a plan to redistribute those to another, to ensure they don’t go to waste.

Connecticut ranks fifth in the nation, using up 65 percent of the doses allocated to it and has vaccinated 3.26 percent of its population against COVID-19.

At the back of the pack are Arkansas, Massachusetts and Mississippi. They have each used just a third of their vaccine doses.

North Carolina and Virginia both set one-day records for new cases on Saturday. They are among 22 states that have set records for daily infections this month, and health experts warn new variants of the virus may lead to an even greater surge in infections.

A highly transmissible variant of the novel coronavirus first detected in the United Kingdom in December has now been found in at least nine US states, adding further urgency to the push to vaccinate more people.

Dr Scott Gottlieb, former head of the US Food and Drug Administration who sits on the board of Pfizer Inc which makes one of the U.S. authorized vaccines, warned of the need for a better system to detect and combat new COVID-19 variants from the UK and South Africa.

‘We’re going to have to update our vaccines and our antibody drugs and other therapeutics regularly to keep up with these new variants as they emerge,’ Gottlieb said in an interview with CBS’ ‘Face the Nation’ on Sunday.