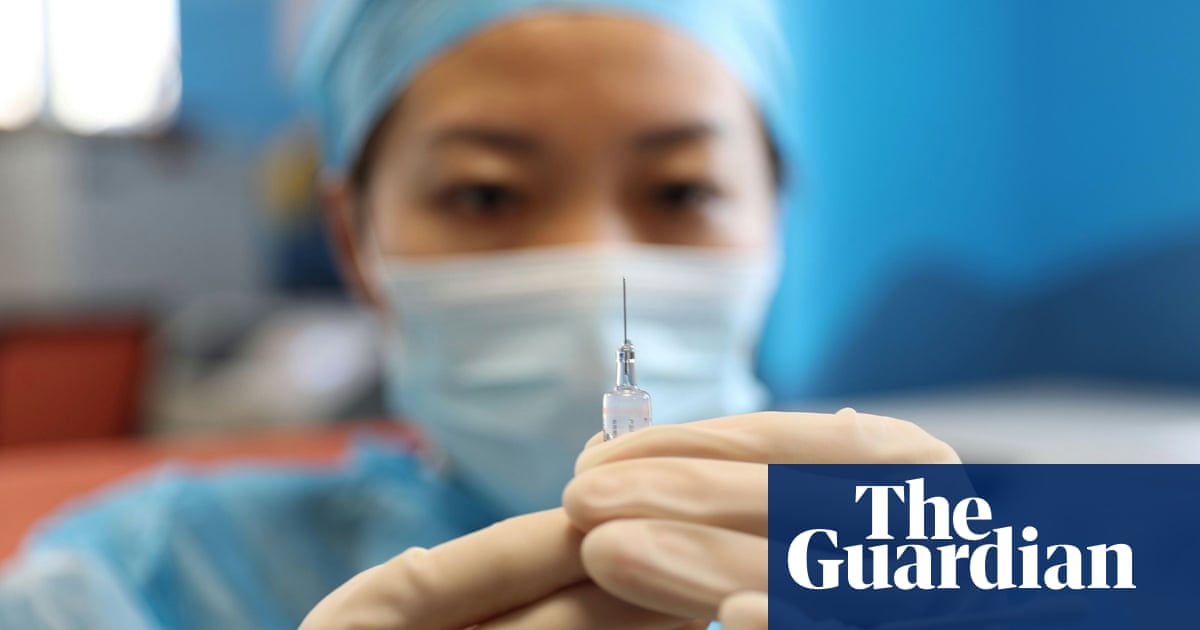 At a Shenzhen hospital, 21-year-old airport worker Wang Shuyue lines up to receive his second shot.

“I feel it’s safe because so many people around the country have taken the vaccine so there shouldn’t be any major problems,” he tells the Guardian. “I think it should be effective otherwise there wouldn’t be so many people taking it.”

Wang is one of 50 million people that China aims to vaccinate against Covid-19 in just a matter of weeks in one of the most ambitious vaccination drives on earth.

Battling its worst outbreak in 10 months, the nation is pushing ahead with its aim to vaccinate about 3.5% of the population before the start of the lunar new year holiday on 11 February, when hundreds of millions of people crisscross the country to visit family and celebrate.

China has committed to using its own vaccines to inoculate its people, and to share them with the rest of the world, particularly developing nations. The drive seeks to bolster – or repair – China’s reputation on the global stage after accusations of cover-up and early missteps in supplying protective equipment. There are logistical advantages to China’s offerings, but with major transparency concerns around late stage clinical data and some contradictory reports, health experts have urged caution.

First announced in December, the vaccination drive involves more than 25,300 sites across a reported 75 cities and rural villages, delivering vaccines in two doses about 21 days apart, free. Local Chinese media reports suggest clinics have received either the emergency-approved Sinovac vaccine (for key workers) or the conditionally approved Sinopharm vaccine (for the wider population). The reported scope and speed of the program has outpaced others, including the US’s Operation Warp Speed and the rollout in Britain.

According to one clinic the Guardian visited, a record of the vaccination will be integrated with local health code apps, and allow recipients to bypass quarantine when travelling between cities and regions.

The rollout began with 18- to 59-year-olds in key worker groups under emergency approvals, and then pivoted to vulnerable people before widening to all people over 60. Authorities aim to have all first doses administered by the end of this week, and second doses before the beginning of festivities. A health commission official, Wang Bin, said on Wednesday 10m doses had been administered so far, including about 1.6 million people under an emergency regime before full approvals were issued. Health experts told state media last week the current rate was likely to reach just 20 million people by deadline, but producers are speeding up production.

The push comes as China reports consecutive days of more than 100 new cases, the highest daily totals since March. Most cases were reported among the rural population of Hebei, the province surrounding Beijing. On Thursday, it was reported that the first person had died from Covid in China in eight months. Three cities near Beijing are locked down.

Calvin Ho, an associate professor of law at Hong Kong university focusing on bioethics, said the 3.5% drive wasn’t expected to produce herd immunity – health authorities have said their eventual aim is for about 60-70% vaccination coverage – but it will give some protection as people gather for the new year.

There were logistical advantages to China’s rollout compared with those of other nations, said Ho. The locally made vaccines don’t require freezing, making transportation and storage far simpler than the Moderna and Pfizer vaccines being used in countries such as the US and UK. China also has the ability to scale up production at a moment’s notice.

The vaccine drive began well before the current Hebei outbreak. Some experts have questioned the need to rush vaccinations, given major concerns over transparency and the vaccine’s efficacy.

The main two Chinese vaccines were produced using a historically successful and less risky method of using an inactive virus to trigger an immune response, but the producers and authorities have been accused of lacking transparency, releasing no phase 3 trial data from the international clinical trials.

On Tuesday, Brazilian researchers revealed the Sinovac vaccine was far less effective than previously stated. The 50.38% overall efficacy pushes the vaccine just over the 50% World Health Organisation benchmark for approval, but falls below the 78% announced last week and well below the efficacy rates of the Moderna and Pfizer vaccines. The findings are likely to raise concerns in the 10 or so countries who have already ordered or received hundreds of millions of doses.

Associate professor James Trauer, the head of epidemiological modelling at Monash University’s school of public health, said in countries like China which have had a relatively small epidemic (since Wuhan’s was contained), achieving herd immunity through vaccination was “critical”. However, those situational factors also meant it wasn’t urgent.

“When you’re having a big vaccination program rollout there is a concern from a safety perspective that there could be reactions that are being missed. And it’s going to be really hard to judge from an efficacy perspective, because there’s so little coronavirus transmitting in China at present,” said Trauer.

“They do have the opportunity to look for high quality data [first], and they’ve elected not to do that. It is a bit concerning.”

HKU’s Ho said the risk of the early rollout appeared low. “Given that we don’t quite know for sure what the actual epidemiological situation is in China … it makes sense to have the precautionary measures in place if the means allow,” he said.

On Tuesday, about a dozen people queued for a vaccine check-in at the Shenzhen Bao’an traditional Chinese medicine hospital group office, one of five official vaccination locations in the south China megacity.

Ms Sun, who teaches Chinese to foreigners, is among those authorities hope to have vaccinated before the lunar new year holiday.

She said she was a little concerned about safety when she had the first shot but hadn’t had any adverse reaction, so was now back for the second. “I decided to take the vaccine myself, it’s entirely free,” she said.

In line with Sun, a man who declined to give his name said he travelled frequently within China for work, and so was taking it as a preventative measure.

“I would encourage people who travel a lot, regardless of within or outside the country, to take the vaccine. But if you’re someone who sits in the office everyday then you can decide if it’s necessary.”