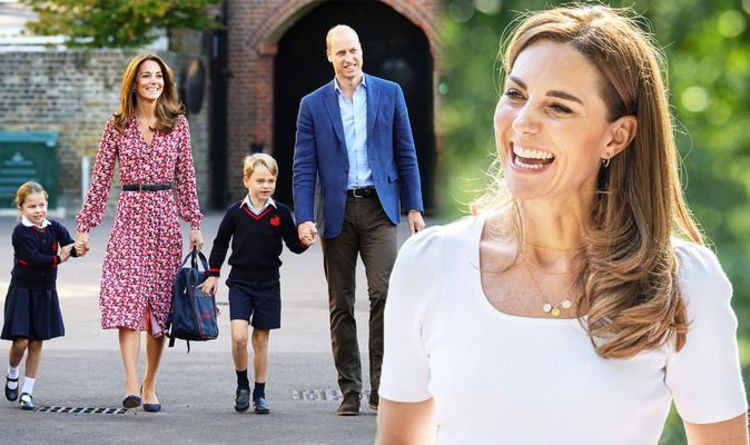 Kate Middleton and Prince William‘s children are set to have growing roles within the Royal Family. While they are sure to become key royals, the Cambridges will often keep them out of the public eye.

The couple are the parents of Prince George, seven, Princess Charlotte, five, and Prince Louis, two.

Shortly after Prince George was born, Kate stepped out for an official photo call.

This is a tradition followed by many royals and Kate also did this after the birth of Charlotte and Louis.

The Duchess of Cambridge stated: “Yeah, [it was] slightly terrifying, I’m not going to lie.

“Everyone had been so supportive, and both William and I were really conscious that this was something that everyone was excited about. And, you know, we’re hugely grateful for the support that the public had shown us, and actually for us to be able to share that joy and appreciation with the public, I felt was really important.

“But equally it was coupled with a newborn baby, and inexperienced parents, and the uncertainty of what that held, so there were all sorts of mixed emotions.”

While royal fans got a glimpse of the children shortly after they were born, Kate and Prince William have focused on their privacy over the years.

The Duke and Duchess of Cambridge will rarely take their children out on official engagements.

Instead, the royals will often share pictures they have taken themselves.

Kate is known for having a love of photography and sharing pictures she has taken at home.By choosing which pictures to release, Kate could be trying to manage how often her children are seen in public, Zoe Bonser, Show Director at The Baby Show, told Express.co.uk.

“Usually Kate takes pictures herself, giving her the freedom and power over what is used in public – and a chance to use her artistic skill,” the expert stated.

As well as protecting the privacy of her children, the expert spoke about some of the other parenting techniques the Duchess has used.

“Kate generally seems to be commended as a great and inspirational mum,” she continued.

“She promotes that children deserve time, attention and love from their parents.

“She advocates that children should speak about their feelings, be taught kindness, respect and honesty and greatly values the importance of hugs.”

While the young royals often stay out of the limelight, the expert suggested Kate will still follow royal tradition.